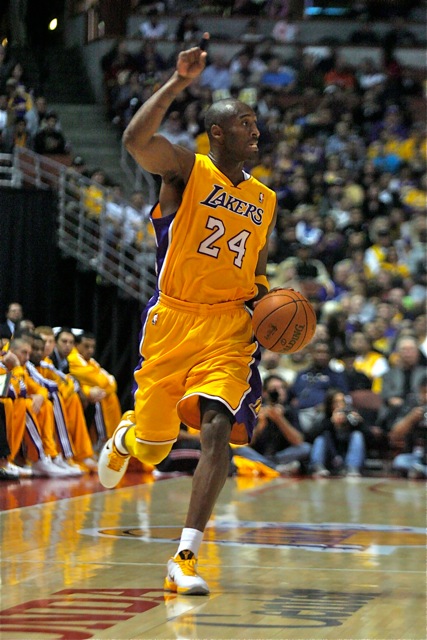 Although the Los Angeles Lakers are battling the Utah Jazz for the final eighth and final postseason spot in the Western Conference, there’s no doubt the Black Mamba will lead his team into the playoffs. This close to the end of the season some players have reached their peak already. Meanwhile, special players take their game to another level. You don’t become a living legend by settling for mediocrity,

Kobe Bryant has one of the most impressive competitive natures that the sports world has ever seen. Ever since he entered the league at the age of 17 and winning the NBA Dunk Contest in his rookie season, Bryant has shown us his hunger for greatness.

With five championships under his belt and his eye on number six, Kobe Bryant has been playing lights out. Bryant surpassed Wilt Chamberlain for forth all-time in scoring against the Sacramento Kings last Saturday. Michael Jordan is next on the list. Bryant lead the league in most 40-point games at age 34, until he was upstaged earlier this week when New York Knicks Forward Carmelo Anthony went off  against the Miami Heat, putting up 50 points with superstars LeBron James and Dwanye Wade out resting for the playoffs.

Anthony then tied Kobe with a 40-point effort against the Atlanta Hawks in the following game. But Greatness doesn’t stop at scoring; Kobe has his team playing at a high level and buying into the winning formula, getting his second 14-assist game on the same night he passed Chamberlain. Kobe turned around and produced a triple-double at home in a win against the Dallas Mavericks with 24 points 12 rebounds and 11 assists.

Moreover, legends aren’t born into greatness, they strive for it. When others stand by and enjoy the moment, icons work at creating the moment. Through blood, sweat and tears they push through the wall and max out their full potential.

Kobe Bryant has already earned a spot in the raptures next Magic Johnson, Kareem Abdul Jabbar, Jerry West, Shaquille O’Neil (as of Tuesday night), and James Worthy. But the Black Mamba has proven he’s not done yet. Being named the greatest Laker ever by legends before him is a great honor in itself. But why settle for that distinction. Why not go out as the greatest player ever to play the game.

Dennis Freeman is a college student and a photojournalist. His porfolio includes shooting photos for Sacramento City College, covering the Sacramento Lions of the United Football League and the NBA’s Sacramento Kings. Dennis is a native of the Bay Area and resides currently in Sacramento where he does freelance photography. He is recently engaged and a proud father of his young son Elijah.

Hip Hop, murder and a father’s relentless quest for justice

Cali Swag District’s Monte’ Talbert was a Motion of Art

Aaron D. Spears is Rising as “The Bold and the Beautiful” Star

In this election, democracy and voters’ rights matter

Blacks and Latinos want streaming services to do better

Teena Marie Was One of a Kind Talent for Music Business

The spotlight is on for ex-Laker Girl Tiffany Daniels